History of the Museum

The Foundation and History of the National Museum of Agriculture

The institution was officially established on the 28 September 1918, the date when an association called the Czech Agricultural Museum was created. Soon after the creation of Czechoslovakia in late October of the same year, the association was transformed into the Czechoslovak Museum of Agriculture, Institute for the Study and Improvement of the Countryside. This organisation soon became, especially thanks to excellent museological work of Josef Kazimour and strong political support from Antonín Švehla and other politicians, one of the most progressive museums of the new republic. This institutionalisation of a museum was, however, preceded by earlier attempts.

The core of the museum’s collection consists of exhibits presented at the 1891 Jubilee Exhibition and 1895 Ethnographic Exhibition, which both took place in Prague. These items jointly formed a collection administered by an agricultural department, which was until 1918 part of the Ethnographic Museum in Prague. The collection was shortly kept in the Sylva-Tarrouca palace at the Na Příkopě boulevard in Prague, and them from 1902 until 1938 in the so-called ‘riding hall’ of Kinský summer palace in the Prague quarter of Smíchov. 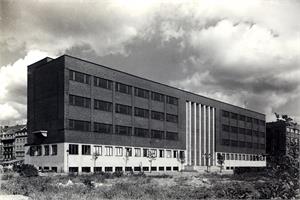 Although regional branches were gradually established in the regional capitals of Czechoslovakia, that is, in Bratislava, Brno, and Opava, the museum had struggled with lack of space since the very beginning. This is also why in the 1930s it was proposed that a new main building of the museum should be constructed in the Prague quarter of Letná. This building, now an important example of Czech functionalism, was erected in 1937–1939 as a joint project with the building of a National Technical Museum based on a project of architect Milan Babuška. Unfortunately, the new building was soon after completion requisitioned by the German occupation army.

After the war, the building was returned to the museum, but already in 1950, the State Dislocation Committee had decided that it should be vacated for the needs of some newly created construction organisations (Stavoprojekt). The museum was then relocated into part of the Konopiště Chateau and to the Kačina Chateau near Kutná Hora. During this period, the Prague building was disfigured by additions of ill-fitting provisory partitions, which, among other things, violated numerous fire safety and safety regulations.

In early 1960s, the museum had moved its collections from the Konopiště Chateau to the Ohrada hunting lodge in Hluboká nad Vltavou. At the same time, it also managed to rent some spaces in the Lednice Chateau in southern Moravia. A merger with a unique Museum of Forestry and Hunting, which was founded as a public museum by Count Jan Adolf II of Schwarzenberg already in 1842, enriched the museum’s collections with some very rare and valuable items. The National Museum of Agriculture thus has a unique opportunity of continuing in the tradition of the fourth oldest museum in the Czech Lands and most likely the oldest similarly specialised museum in Europe.

In late 1980s and early 1990s, the museum acquired further facilities for keeping and exhibiting its collections in Zdechovice, Valtice (a burgher house in the town square, which still houses a branch of the National Museum of Agriculture) and in Janův hrad (John’s Castle). In 2001, the museum had vacated its spaces in Lednice, and in 2003–2003, its collections were moved from Zdechovice to a compound in Čáslav, which opened to the public in 2004.

The museum had returned to its purpose-built headuarters in Prague in 1994, and immediately started their gradual restoration. The National Museum of Agriculture is now housed in a valuable, but functionally unsuitable building, which is gradually renovated and adjusted to meet safety regulations and the requirements of modern museum presentation. The building is thus gradually returning to its original purpose. In 2006, the function of its founder was transferred from the Ministry of Culture to the Ministry of Agriculture, which established a new public-benefit corporation called the National Museum of Agriculture.

Years of absence from Prague and multiple relocations had disrupted the museum’s continuity of activity and led to a loss of public awareness about the original function of the building and of the National Museum of Agriculture.

Currently, the museum’s goal is not only to follow up on the interwar tradition but also to employ the most up-to-date exhibiting trends and return among the most important and respected museums in the Czech Republic.