The first steam-driven ploughs were used by Englishman John Fowler in the eighteen-fifties. The foundation was two steam engines placed at opposite ends of a field. Ploughing was carried out using a plough attached to a cable, usually double-sided, to do away with the need to turn it around. The considerable power of the machines and the design of the plough allowed for ploughing multiple furrows at once without the risk of compacting the soil. Steam ploughing was used up until the Second World War. It was replaced with more mobile and multifunctional tractors.

The Z5 type Přemysl traction engine with the serial number 10675 was completed in the factory in Leeds and prepared for shipping on 17 June 1906. The dismantled machine was first sent to the headquarters in Magdeburg and from there continued to the Prague branch. Assembly and testing took place in Prague and, at the same time, the boiler was officially approved and entered into the records of the state supervisory authority. Thanks to these steps, the machine was later successfully identified. 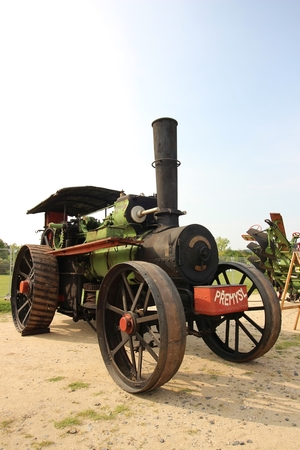 The new plough was purchased in 1907 by the by the Močovice and Libice sugar factories owned by František Wiesner. The machine remained in operation here until the mid-1930s, when the sugar factories went bankrupt due to the economic crisis.

The pair of machines with the serial numbers 10674 and 10675 were probably bought by Jaroslav Kučera from Nepřevázka in 1941 for a family business which had been founded by his father and for which he carried out contracted ploughing together with his brother Václav.

The Kučera brothers undoubtedly operated at least three sets of steam-driven ploughs, however, during nationalisation in 1949, only two were confiscated. Přemysl and Libuše were among the confiscated machines. Neither the fate nor the name of traction engine 10674 have been clearly proven.

The Kučera brothers became employees of the Bezno State Farm (later the Mladá Boleslav State Farm), where they continued to repair machinery and steam-driven ploughs until Jaroslav’s death in 1972. The passing of Jaroslav Kučera not only ended the work of the Přemysl and Libuše set in Nepřevázka, but also marked the definitive end of steam ploughing in the Czech lands.

As far as the naming of ploughs is concerned, all we can currently say with certainty is that before 1970, Přemysl’s name was Dacan. Relatively extensive research in the archives of the state boiler supervisory body, systematic research assistance from the United Kingdom, witness information, historical photo documentation, and detailed physical exploration of both ploughs have not yet produced any clear findings. Therefore, only the identity of Přemysl, whose factory nameplate has been preserved, is known. Libuše’s production data has not been fully confirmed. It can be said with certainty that these two machines, Přemysl and Libuše, did not form an original pair, as they are different factory types. 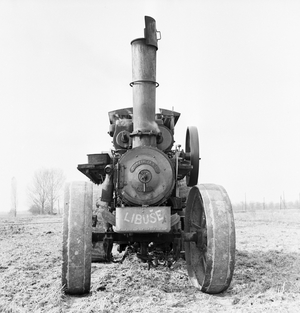 In view of their historical value, the National Agricultural Museum expressed an interest in them, and so in 1972, they were purchased from JZD Katusice and, in December of the same year, the traction engines travelled by themselves together with two ploughs to the site of the National Museum of Agriculture at Kačina 60 km (37 miles) away! They were driven by engineers Václav Kučera, Alois Podzimek, Václav Gruntman and Václav Havelka. The journey took two days. The traction engines then spent the following 17 years in the open air in the château park.

Over the years that followed, the traction engines were brought back to life on a further two occasions. In the autumn of 1979, they took part in the filming of the Slovak film Chlapec z majera (The Boy from the Farmstead) in the neighbouring municipality of Svatý Mikuláš, and in October 1987, they took to the field once again, this time in nearby Svatá Kateřina, for the filming of a documentary about cable ploughing entitled “A Day in the Life of Přemysl and Libuše, or Steam Ploughing” produced by the studio of the University of Agriculture. In 1991, the set was relocated to a temporary exhibition of the NMA in Zdechovice, where they finally found shelter in a metal shed. From there, they moved to the museum’s newly established branch in Čáslav in 2002 and can still be seen there today.

In May 1993, both traction engines were registered on the List of Movable Cultural Heritage in the Czech Republic.